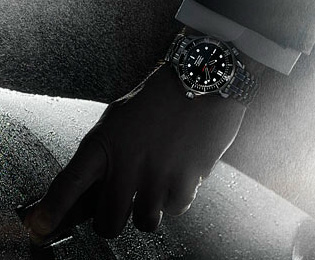 Fans of Omega watches and James Bond may be able to catch a glimpse of a Collectors Edition Omega Seamaster watch on the wrist of Daniel Craig, in the first trailer of the new James Bond film, "Quantum of Solace", which was released for viewing on Monday, June 30, 2008.

Quantum of Solace is the 22nd James Bond adventure, and the second performance of Daniel Craig in the role of the world's most famous spy.  The film is scheduled for opening in the United Kingdom on October 31, 2008, and in the United States on November 7,  followed after by the rest of the world.

The Omega Seamaster is one of several watches chosen by various James Bond actors over the decades, and was also worn by Pierce Brosnan during his time playing Bond.  In the original Ian Fleming novels, Bond's chosen timepiece was a Rolex Submariner.

OMEGA presents the new version of the Seamaster Diver 300m James Bond which collectors and fans have treasured since 1995.

For the past decade, Her Majesty’s Secret Service agent 007 has been wearing an OMEGA Seamaster watch. Fans of the iconic spy, along with enthusiasts of fine watches, wait in anticipation of each new version of the timepiece.
Their patience will soon be rewarded. OMEGA will be releasing a special update of the incredibly popular Seamaster Diver 300m James Bond watch which has been worn by 007 since GOLDENEYE.
The « James Bond 007 Collector’s Piece » is the most elegant version yet and the next step in the evolution of the Seamaster Diver 300m James Bond watches.
Anyone familiar with the classic James Bond’s watch with its trademark blue bezel will be in for some surprises!
Visually striking, the « James Bond 007 Collector’s Piece » features a polished, lacquered black dial with black gold plated hour markers filled with white Super-LumiNova. The luminous hour and minute hands are also plated with black gold. The watch has a central seconds hand with a red tip and a red “007” logo as a counterweight which rotates in stark contrast to its black dial. Only 10,007 pieces of this exclusive Seamaster will be produced. Paying tribute to OMEGA’s long partnership with the world’s favourite secret agent, it is destined to be an instant collector’s item.
The watch has a distinctive polished and brushed stainless steel case with a diameter of 41 mm. Its specially-designed bracelet is unique to the James Bond watches and is one of the features which makes them immediately recognisable. The watch has a scratch-resistant, anti-reflective domed sapphire crystal.
The « James Bond 007 Collector’s Piece » is not only aesthetically dazzling. James Bond would be disappointed with any technology that wasn’t the most advanced in the world and this watch meets his most exacting demands. It features OMEGA’s calibre 2500 self-winding movement fitted with the revolutionary Co-Axial Escapement, which reduces friction while offering better long-term accuracy,
The watch is a certified chronometer with functions essential to professional divers. Its screw-in case back (with a “007” medallion) and stainless steel screw-in crown featuring an OMEGA logo ensure water resistance. The watch also has a unidirectional rotating bezel with a distinctive black aluminium ring. A helium escape valve allows helium atoms to escape during decompression, particularly necessary for professional divers operating from diving bells. As its name suggests, the watch is water resistant up to 300 metres.


The presentation case is nearly as striking as the watch itself. Crafted from black leather, its black interior calls to mind the lining of the tuxedos which are as synonymous to Bond as the OMEGA Seamaster Diver 300m watches he’s been wearing for more than a decade.
While some of the advanced features will appeal particularly to divers, the « James Bond 007 Collector’s Piece » will prove irresistible to fans of 007 and to anyone interested in elegant, distinctive, state-of-the-technology watches.
The newest film, Quantum Of Solace, produced by Michael G. Wilson and Barbara Broccoli for EON Productions and directed by Marc Forster, will be released internationally in November 2008. Daniel Craig will reprise his role as James Bond for this 22nd film in the Bond series.

A physical "press kit" appeared yesterday on eBay, by a Seller claiming those materials had just been released to Authorized Dealers. But today all mystery surrounding the Omega "Casino Royale" 2907.50.91 Planet Ocean Limited Series has now evaporated with its official release for publication of the following text and images.

Even whilst relaxing on the beach, only the best is good enough for James Bond, an ethos perfectly reflected in his choice of diving partner. 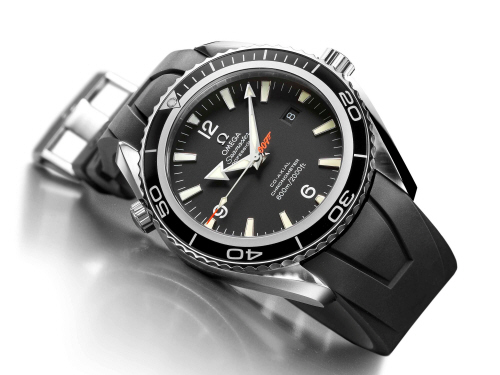 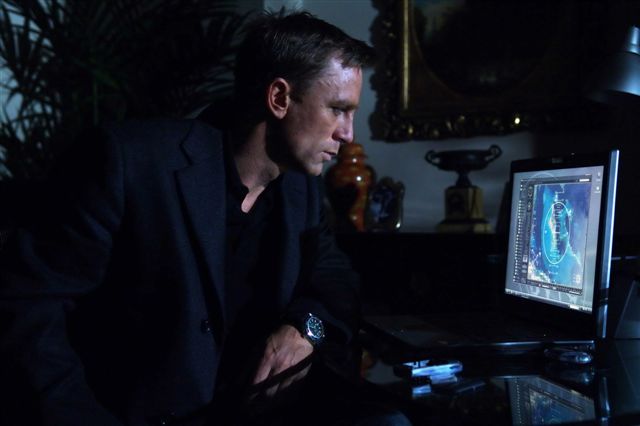 The Seamaster Planet Ocean "Casino Royale" is a potent combination of technical complexity and aesthetic elegance.

The Planet Ocean model is identified by its distinctive bezel, which recalls the original Seamaster 300 metre models, albeit with a choice between classic and highly contemporary interpretations of this historical theme.

Meticulous attention to detail resulted in a slightly different bezel design with a model taking on a resolutely sporty look. The unidirectional rotating bezel has minute graduations for the first fifteen minutes, numbers for the subsequent ten-minute sectors and a luminous triangular marker at 12 o'clock. 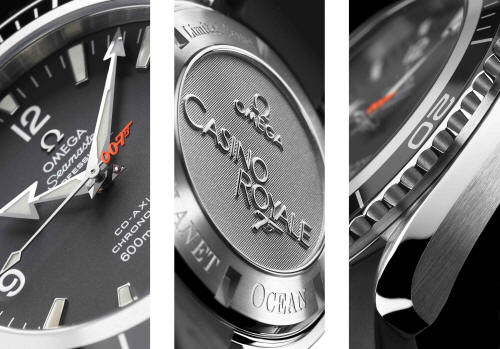 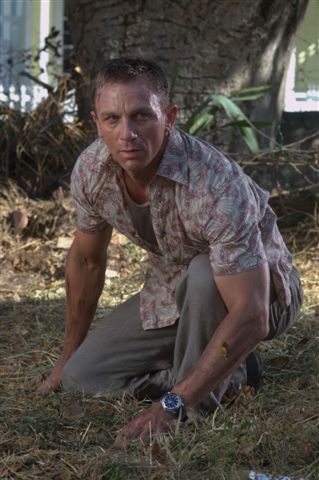 Other features indicating that this is a professional divers’ watch are the watertight screw-in crown, a screw-in case back and the helium escape valve, located at 10 o’clock and embossed with "He". The Seamaster Planet Ocean is water resistant to 600 metres (2000 feet).

The matt black dial also offers excellent clarity, thanks to applied luminous hour markers and Arabic numerals at 12, 6 and 9 o'clock, with date window at 3 o'clock. The facetted arrowhead hour and minute hands also have luminous SuperLuminova inserts, and a luminous arrowhead seconds hand with orange tip offers ultimate visibility down to the last second. Beneath the surface is Omega's calibre 2500 Co-Axial Escapement movement, which is a COSC-certified chronometer and has a power reserve of 48 hours. 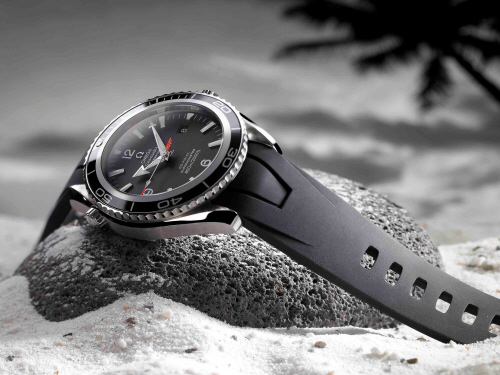 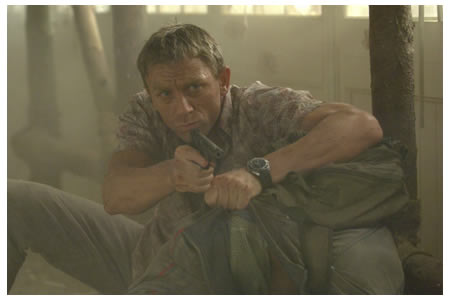 The Seamaster Planet Ocean "Casino Royale" is available with a 45.5 mm diameter case and a black rubber strap. This Limited Edition has exclusive features: the central second hand bears the "007" gun logo in orange, that recalls the code name of the famous MI6 secret agent.

The stainless-steel case back is embossed with the "Casino Royal" logo as well as the series number of each Limited Edition watch.

Limited to 5’007 pieces, the Seamaster Planet Ocean "Casino Royale" will be a perfect collector's item for all James Bond aficionados.

Since these images are all sourced and identified through Omega SA, there are Posted here without watermarks. I'll provide hosting of additional images and full versions (hi res) later today.

The following three images round out the six included by Omega SA in its "Casino Royale" 2907.50.91 Planet Ocean Limited Series press release issued today. None included further captioning, beyond identification of Daniel Craig as the actor portraying James Bond 007 in Casino Royale, which opens this Friday. Higher (full screen) resolution files exist for each of these pictures, and I do have them. If there's interest, I'll Post them here at a later time.